He Don't Even Know! - Disturbed Edition 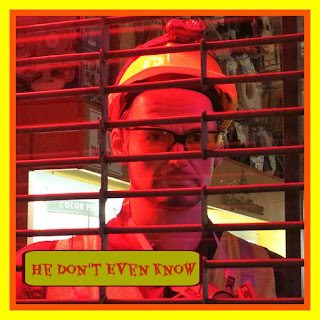 Do you remember that movie in 1987, MANNEQUIN?  You know, the one about the guy who falls in love with a mannequin in the store window and romantic hijinx ensue?  I don't remember it that well, to be honest, but I do remember that it kicked off my mannequin fantasies!  I remember keeping a keen eye out for hot looking mannequins, not the high cheeked, pretty boy ones that abounded at the time, but the manly ones (like the one in the NY hardware store pictured above).  I liked when they had big chests and stern looks on their faces.  Eventually, that kinky turn-on turned into the idea of how neato it would be to have one as a roommate and dress him up (and steal quick hugs from...)
I never did get one because they were so expensive!  Even the ones with chipped noses and missing fingertips ran into the hundreds. Eventually,  I let go of the idea.

My fantasies have evolved from plastic men to actual men I photograph in random public places.
Those men are featured in my regular "He Don't Even Know" entries.  I think it's perfectly harmless, while some argue that I'm a creep & invade those mens' public privacy,  Now I've found something EVEN MORE harmless to the attention of my fantasies! 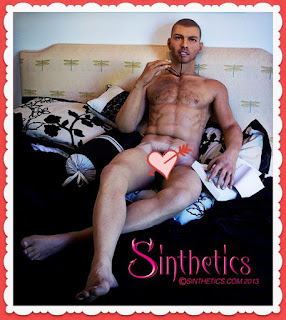 Gabriel is a synthetic male, who promises to give nothing but motionless love!
As a gay single man, with no prospects in the immediate future, might I consider getting this "man" to be my live-in lover?  Wouldn't I love to come home from a long day at work and find this waiting for me in my bedroom (with much more tasteful bedding)?  Why not?  He's got everything I could want in a motionless, emotionless mate!  Of course, I'd always be the one doing the dishes, but I wouldn't mind as long as he kept me happy in the bedroom and carpool lane!  I could just buy him and (un)dress him in anything I want and he wouldn't argue that it's too tight around the butt.
It's a few thousand dollars, but wouldn't I spend that on dinner, shows and therapy over the years, anyway?  And if I do die alone, it'll be in the arms of a really hunky thing who couldn't have possibly dialed 911 when I slipped in the tub and hit my head on the corner of the toilet tank.  I would arrange for us to be cremated together, because really, after what I'd do to this "guy", nobody would want him second hand.  although, I'd have to seriously consider what to do with him if I actually brought an actual man home... maybe I'd find out if the real guy is into three-ish ways during dinner.

Anyway, if you see me at the grocery store trying to get this big lug out of the seat of the grocery cart, be nice, ignore his lack of life and just say, "Hi boys!"
If you're not rolling your eyes at this idea or are considering getting one yourself (maybe we can go halfies and do every other weekend?)  check out the site HERE (be careful, they show you my future boyfriend's junk!)

I can't wait to go shopping for cute pajamas for him!!