Gay of a Certain Age - Lot of Day Goes By 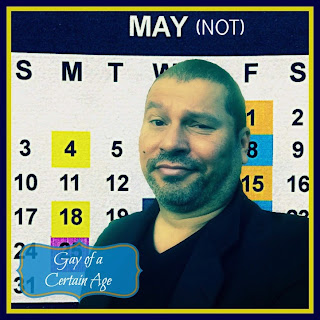 Some people think I'm pretty good, but actually, I'M THE WORST!
I'm the worst at double booking and missing events!
Not only am I too busy for love, but, apparently, I'm too busy for my own life!
Even though I have certain set appointments the same days each month,
I sometimes forget they exist and in excitement of an invitation I say, "Yes!",
then a day or so later I have to say, "No", with an audible saddy face.

Why, just this weekend, I missed two events that I was very much looking forward to.
One was a fundraiser pool party, full of men I know & would like to hang around with.
I missed it because I got excited about an invite to see PITCH PERFECT 2 in the morning,
after which I started fretting and preparing for an event that actually took place the night before!
So I missed one event because I was focused on another that I had already missed.
(I had to fret & prepare because I was expected to be dressed formally, and I wasn't sure which of two nearly formal outfits I would feel least uncomfortable in.  Also, I was very excited because it was a fundraiser that included totally nude hunky servers- Anything for Charity, I say!)

As a Gay of a Certain Age, it has become apparent that I have to start using a calendar daily.  I mean I have to actually stop myself and look at the goddam thing before I start my day.  I think my memory is still pretty much in tact, it's just that I get so excited that anyone thought to invite me to anything that my mind drops one event for another, like a dog would do with a tennis ball for a Snausage.  Or maybe my mind is going and I just can't remember dates or names, (unless they are soap opera related because I can still remember that Michael Weiss started playing the role of Mike Horton on Days of Our Lives on August 18, 1985. He debuted shirtless.)

I know, most people have used a calendar daily almost all their lives, but this is new to me.  It's a habit I never got in to. When I was younger, I never really had much going on and I proudly lived off the cuff and spontaneously.  Not anymore.
I think I can get used to it, though.  Just be patient with me.  I'll get the hang of it.  I'm content knowing that needing a calendar is a normal thing and while I may have to start scheduling free time,  if I ever have to start scheduling my ALONE time to remember to do it, just shoot me.
Posted by Danny in WeHo at 7:30 AM

Email ThisBlogThis!Share to TwitterShare to FacebookShare to Pinterest
Labels: calendar, Gay of a certain age, memory