This Is Why I Am Single - The LOL with it! 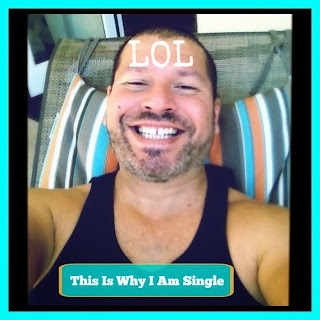 One of my DABs was telling a story about finally breaking the ice
on a certain subject with another guy to whom he'd been trying to convey his feelings.
He finally said the perfect thing to get the ball rolling on "the talk", but then immediately
let out the dreaded "Just kidding".  Ugh!  I share his frustration.

This is why I am single!  Sometime I don't have the balls to tell someone how I'm feeling.
Being a Libra, keeping things balanced, there are other times when I say exactly what's
on my mind.  One time I'll be all, "You wanna go back to my place an bump jangly parts?" While another time I'll be kind of, "Wouldn't it be nice if we were like this everyday? Just Kidding!"
The part about this that kills me is that when I finally say what I've been too scared to say, I immediately kill it with a "Just Kidding!" or "LOL".  What is that about?

Why do we dismiss our wants or desires? What have we got to lose by expressing them?
I guess that's the difference for me.  I'm not afraid to lose a make out session or sex, because when I'm boldly saying that's what I want, I'm either pretty sure the other guy wants it, too or I don't worry that a "No," means anything more than, "Not right now."
I LOL the situation when I worry that it'll change a relationship.  I fear that a "no" will mean "no to me" rather than "no to a make-out session or a romp".  It could mean "No, now you've ruined everything and I don't want to see you anymore," or "No, now we can't even be friends."  That would suck.

I guess the LOL is a buffer.  It's a way of getting the idea out there, then letting the other off the hook for a response, in hopes that they now Know it's in the air and it's up to them to bring it up.
Isn't that silly?  If that's the purpose of the LOL, doesn't that let them know exactly how I feel and they'll either react the way I was afraid they'd react or worse, hear it, then ignore it and keep pretending that they don't know, leaving us in a weird "want more" limbo?
Isn't it worse knowing that they know, but they're willing to leave you hanging?  Or maybe, they're hoping their not responding to it will be the message, "I like things how they are"?  It puts the onus on them to tell me, putting them in the position I didn't want to be in.  That's not nice.

Here's my resolve.  Say it or don't get hung upon pussies who can't say it, either.
Simple, right?

Email ThisBlogThis!Share to TwitterShare to FacebookShare to Pinterest
Labels: DAB, just kidding, LOL, relationship, This is why I am Single