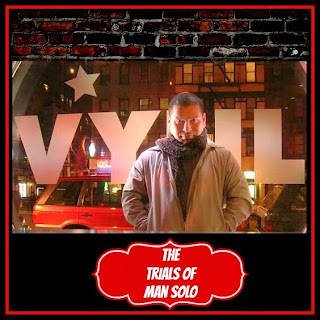 There I was, in New York City, April, 2015,
waiting at Vynl for my friend and current DAB (Die Alone Buddy), Richard.
I got there a little early, so the wait for a table would be shorter.
Unfortunately, my twenty minute wait for a table for two was all for naught,
as Richard and I had miscommunicated and I would be dining alone.
When I informed the lovely hostess that, I would be dining alone, after all,
she took a glance at two available tables and then informed me that I'd have to wait
fifteen minutes or so for an available table, behind another unfortunate single man
who was waiting to dine alone (and who arrived after I did, by the bi).
Such are The Trials of Man Solo.  You see, the two available tables both had capacity for
four people and, even though there was no one waiting to sit in them, their policy
is to make two people who are actually there (one who had been there for twenty minutes
already) wait longer until a smaller table opens up.  I understand that a business mind might think that a table of four is better than a table of one, because that means a bigger check.  However,
if there is zero sitting at the table, one is better, right?  One is more than zero, right?
Isn't one in the booth better than four in the bush?

The fact of the matter is that regardless of the number of people seated at a table, the people
coming to dine there are going to have to wait for table until whomever is sitting there is done,
most people are willing to do that. If the service is good, a single would probably be in and out in a jiff.  I think it is outrageous to make two people wait while there are two available tables with no one in line to sit in them.  At the very least, the hostess might have suggested that we two singles share one table.  Aside from being outraged, the fact that I had a show starting in less than an hour kept me from patiently waiting for another 15 minutes or so to be seated.  I left in an exaggerated huff and settled for a tasty bowl at a Chipotle on the way to the theater.

Vynl used to be a place at which I HAD to eat, at least once, every visit to N.Y.
What with Chelsea's 8th Avenue fading away into nothingness, it was nice to have a place to go where I could count on a tasty meal and good time.  I can't return there. While I have no problem dining alone, I do have issues with a place that makes me feel penalized for it.  I shan't return to
Vnyl, I'll just pretend that it was located on 8th Avenue and disappeared along with the rest of some
of my other favorite haunts.  (Yes, I did enjoy a few meals at the Vynl briefly located at 8th & 16th).  I might miss its colorful decor with records on the wall and musically themed restrooms, but
the good thing about New York is there are plenty of restaurants with charm and personality.
Just remember, there may be 45's on the wall, but there are no singles allowed at Vynl.