This Is Why I Am Single - With Six you get "Scott" 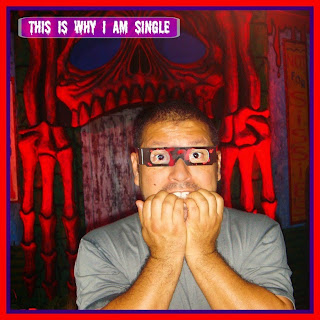 So, there's this guy I met.  I really liked him and we had great chemistry as we sat
and chatted at this fundraiser.  Truth be told, he had me thinking about more than his brain and things in common... He was an average looking guy, with a tight body on him that made me wish I
had those x-ray glasses they sell in old comic books because I was dying to see exactly how his stuff was put together in his tight t-shirt and butt-hugging slacks!  Then, to my incredible luck, I saw him
at Trader Joe's in the the snack aisle and decided that I'd break the ice by asking him to recommend a good gluten-free cookie.  As I stepped toward him I immediately froze.  It suddenly occurred to me that I had forgotten his name!  How was it possible that this super friendly hot guy had been melting my butter all week long and I couldn't remember his name?  I was fairly sure it was Nick, but it might not have been.  I got really embarrassed, standing there like an idiot, frozen trying to think of his name.  Then, he saw me, smiled and waved.  I panicked and pretended I didn't see him and made a sharp right toward the pet food.  I don't have a pet.  I picked up a bag of gluten-free kibble and pretended to read the ingredients, dreading that he might turn the corner and confront me, telling me that he hates me for forgetting his name.  Shaming me by saying if I'd forgotten his name, I mustn't be very interested, mustn't I!  Now it is ruined for life!
So goes my day to day life, a victim of fear.

This is why I am single!  I'm not trained in psychology or psychiatry, but I have watched all ten seasons of CRIMINAL MINDS and seven seasons of THE MENTALIST, so I feel qualified enough to say that I suffer from a condition I have named "MISNOMOPHOBIA"- the fear of getting someone's name wrong.  I will admit I'm terrible at remembering names, so it must be guilt I feel about forgetting names that builds into an anxiety that prevents me from uttering a person's name, even if I'm sure it is correct.  At parties I'm uneasy because I worry that I'll have to introduce someone to someone else and I won't be certain that I know their names.  There are literally hundreds of times that I've stopped short of saying someone's name and seconds later find that the name I was going to say was correct.
This is bad for an actor, too.  There's a casting director I met socially and saw again several times after.  It was on our sixth meeting that he simply said, "Scott" in a tone that might as well have said, "You're never gonna read for me".  Which is worse, not knowing his name or calling him, "Todd"?  What if he knew a Todd that was a complete asshole and he got offended that I thought that was him? Either way, in the last 15 years that we met, I've never read for him.  That makes my self-diagnosed phobia even worse!  There's so much at stake, I have to get it right!

Email ThisBlogThis!Share to TwitterShare to FacebookShare to Pinterest
Labels: fear, misnomophobia, names, phobia, social disorder, This is why I am Single