Gay Of A Certain Age - The Rainbow Never Fades 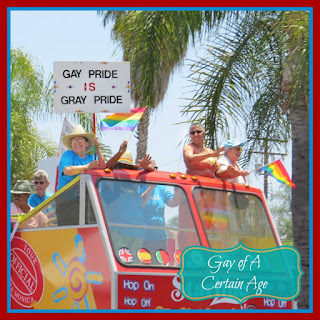 You guys, how long is it until that's me holding that sign?
For reals, am I gonna be doing the Gay Pride Parade after my ankles
have withered away and I can't wear the Chico's Angels cha cha heels anymore?
As a Gay Of A Certain Age, I've never really considered my role  as a senior citizen in the gay community beyond "burden" and "troll".  I suppose I'll have to be contributing to Gay Visibility
until people can live in this country without shame about who they love (or tragically, TRY to love)
and closets hold only clothes and that damned porn dvd collection I swore I was gonna get rid of back in my late 40's...

I've never really considered what it is going to be like being a gay senior, beyond the name of my blog.  I've never considered what it is like to be well into your sunset years and then finally see that it's okay to be who you are.  It must be extra difficult to come out the longer you're in.  Have some of these folk actually spent 50 years, or so, lying to themselves and others just to survive?  Is it scarier pursuing a same-sex relationship so late in life, so much so that one would choose to stay in the closet just to increase their chances of not being alone?  How much has shame and fear compounded like interest on a Bank of America loan?

On the other hand, this is about the time that those brave folks who caused a riot at the Stonewall would be able to look back and see all the good that they have done; Gay Pride madness in most major cities, defying closets and the sad close-minded people who wallow in ignorance and try to pull  us in with them;  Visibility in great numbers, but sadly, not great enough.  We will continue to need to march until we are all allowed to get married, until families learn that disowning their  gay child and throwing them out of their home is not an option, until men and women don't enter into loveless marriages simply to keep up appearances, then wreck a home when they can no longer keep up the charade, until people are not judged by who they love, until the heterosexual world stops being afraid of what is different from them and stops fearing that they are targets for recruitment, because no one knows better than the gays, you can't change a person's sexuality.

So yeah, in 20 years or so, I will gladly (and carefully) hop on a tourist bus and hold a sign that says "Gay Pride Is Gray Pride" to do my part! That is, if Gay Pride parades are even necessary 20 years from now.  Until then, I'll continue with the Chico's Angels parade participation and when that comes to an end, I'll finally get to show up in jeans and a vintage (by then) GOLDEN GIRLS t-shirt!
Posted by Danny in WeHo at 11:30 PM