This Is Why I Am Single - The Look Away of Love 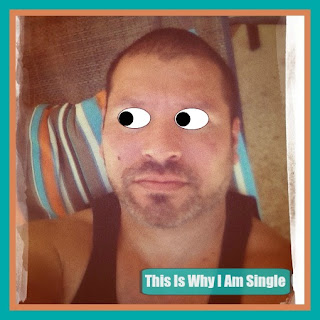 Today I had to deal with a car issue, that is not worth getting into,
what is worth getting into is the guy who helped me at the repair place.
(I'm pretty sure I mean that the way it sounds)
See the thing is, he was handsome.  He wasn't a hot stud model man,
he was just a nice, good looking guy and I was digging him hard.  I was a little distracted
by what was going on inside me, and I worked hard to listen to what he was telling me.
It got to where I could not look at him!  I was worried we'd make eye contact and I'd be busted for my rapidly developing crush.

This is why I am single; when I'm in a setting that is not specifically gay, i.e. a bar, a party, a Broadway show... I immediately break down and avert my eyes from a guy  I find attractive.  I dare not make eye contact for fear of revealing my vulnerability, or worse, getting a severe ass kicking.
There have been three specific instances (two before I realized I was gay) when in non-gay settings, I made direct eye contact with a guy.  We were locked on.  I swear, in each instance, there was an intense lock and we could not stop staring.  Simultaneously, there was an energy passing between us that could have been undeniable attraction or extreme unmitigated hate.  It happened once at a Kroger's in Galveston Texas with a typically 80's looking hunk-bagger two aisles away, another time with a cutie pie-hunk co-worker at Gasoline Alley across a bar and one time, across the table with my cousin's roommate in Santa Maria- we locked eyes and stared intensely for over a minute- I have no idea who saw this at the Kroger's or Gasoline Alley but there we stood surrounded by people, burning holes into each others souls for who knows how long, exactly.  Then suddenly, they all ended the same way, a sudden snap, then a gasp for air and the look down and away.  I have no idea if any of those guys turned out to be gay, but those moments were exhilarating and frightening.  It was never acknowledged by tho co-worker or the roommate, as if it had never happened.

I guess, now I just skip to the eyes down when I feel like that in an unfamiliar setting.
The ironic thing is, in a bar or at a party, I can sometimes just summon the gumption and approach a guy with no problem or qualm about letting him know what I have in mind.  When I walk down the street, I walk with my head up and ready to make eye contact with whomever comes my way.  I notice most people will look down or away as we get closer and cross paths.  I smile, and think to myself, "why so shy?"  That is until it's a guy I find terribly attractive, then I have to work very hard to keep my eyes up.  So, if we're out in a not specifically gay setting and I don't look at you, it means I like you!
Posted by Danny in WeHo at 5:41 PM

Email ThisBlogThis!Share to TwitterShare to FacebookShare to Pinterest
Labels: avert your eyes, contact, shy, This is why I am Single