The Trials Of Man Solo - A Certain Kind of Death 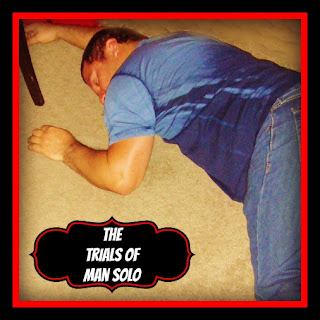 When you visit a blog named DieAloneWithMe.Com,
you know you gotta consider the literal aspect of dying alone.
I know I've thought about it often.  You don't have to be elderly to die in your apartment
and lay there for days before people realize you're missing, then either look for you
or get informed by the apartment manager who smelled the stench of death.
I've imagined all kinds of interesting accidents that would leave me dead and waiting for discovery.
There's the one where I'm dancing like an idiot, trip over my own foot, slam my head on the
corner of my entertainment center and lay unconscious bleeding out on the carpet.
Or the one where I'm in the kitchen and am so hungry I pop six gluten-free mushroom ravioli
from Gelson's in my mouth all at once, then choke on them.  I desperately throw myself on the
floor to try to get a good rush of air to push the tasty Italian treat out, but I don't get it quite right and stay on the floor choking and ouching from the unsuccessful throw down, I pass out & die.
My absolute favorite is the one where I slip in the shower and fall through the glass shower door, in just the right way to completely cut myself entirely in half, leaving a gruesome & awful mess.
I have a great circle of friends, but honestly, I think I'd be down for at least two days before someone got worried enough to come looking for me.  Yes, contemplating my own lonesome death can be a little depressing, but with some morbid imaginings, it can be kind of fun, too!

If the subject hasn't scared you off, might I suggest for your morbid viewing curiosity,
a documentary I stumbled upon a few years back that has stayed with me.
It's called A CERTAIN KIND OF DEATH and it's about people whose job it is to identify the
dead who are all alone in the world, with little clue who they are.  It is depressing but fascinating!
You can catch it on the Video On Demand sites or HERE, on the YouTubes.
Watch it alone for full effect!

I'd watch it alone with you, but I have to set up a daily appointment with one of my DABs,
in order to lessen the likelihood of such a demise.

Email ThisBlogThis!Share to TwitterShare to FacebookShare to Pinterest
Labels: A Certain Kind Of Death, alone, death, die, documentary, The Trials of Man Solo