This Is Why I Am Single - My Alleged Father 3 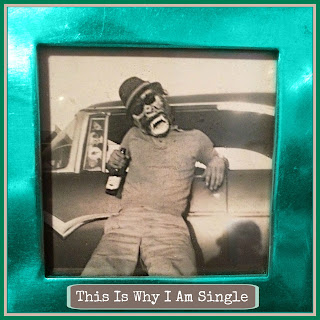 I woke up this morning and logged on to Facebook to see all of the tributes
to dads, living & dead. Happy Father's Day!
I'm not posting one of those today, at least not for my alleged father.
I don't mind seeing others post their glad tidings to the men who raised
them and were there to influence their lives, in good ways and odd.
I'm glad for them.  Also, I am sad for those who make their posts in memory
of their fathers who have died, who were taken away from them.
I know the absence, but for me (and many others) it is different because my alleged father
chose his absence.
As I grew up and saw images like these 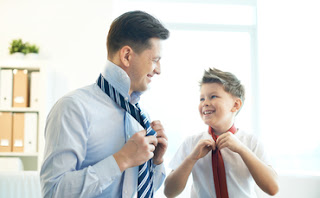 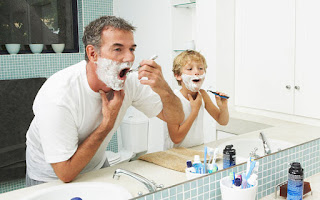 I saw what my relationship was "supposed" to be like.
I think I adjusted pretty well, for a kid.  I had my mom for all of my survival needs
(and she worked harder than most people should have to).  I just learned to do without.
I learned to do the things that needed to be done, like shaving, by doing them.  Trail & error
kind of stuff.  I didn't need someone to teach me. (Although, I do remember my cousin poking fun at me because I applied my deodorant, "like a woman".  I guess a lot of my learning was from observing. Apparently, I never saw my brother put on deodorant.)
(Also, to this day I still haven't learned to tie a tie, but I mostly don't learn so that I will
keep the opportunity to ask any hunk nearby to show me... 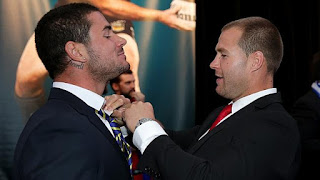 Now, as an adult and as a gay of a certain age, I do look back and miss those moments
a little, but what stings about it is that those moments didn't happen because they were
inconvenient.  Maybe I'd feel a little better about it if in his absence my alleged father had made a great breakthrough in some specific field, if he had become a great success at something because he dedicated all of his time to it, but that's not the case.
There is no great legacy that will replace the lost father/son bonding.
Actually, I don't need anything from him like that, lost moments are lost.
I'm not posting this as a "wah wah wah, poor me", this about another bit of damage that
has resulted.  I don't hate my alleged father, sometimes I do worry about him a little,
but what I feel most where he's concerned is disappointed.

This is why I am single; while a good portion of my worries about me in a relationship is
that I'll find out that I can be just as selfish as my alleged father, the bigger issue is
that because of that, I withhold. This does not occur only in romantic (I guess potentially romantic) relationships.  I withhold my emotions and trust because if I get too far in, I may be the one that causes that disappointment.  I suppose it's also to protect myself from the possibility of experiencing it, but honestly I've faced disappointment enough to know I can handle it and things get better.
All I know for sure is that I don't want to be the source of that for someone else.  I don't want to be like him.  CLICHE' ALERT We can't help becoming our parents.  I mean that to say, couldn't the withholding on my part be just as disappointing.  I don't know who I'm protecting or how.  I don't know why I don't trust others to handle disappointment from me.  So, now let me say that my biggest worry is that I won't be able to stop withholding.  I may never be brave enough to just go balls out, completely open, fully trusting with someone.  THEN, start worrying that I'll be selfish and disappoint them!  Golly, I guess my alleged father gave ME the gift that keeps giving...

In all honesty, I find it hard to picture my alleged father's dad, taking him aside and living out the Norman Rockwell Pops & Junior moments, so I don't know if he was even capable of doing those things with me.  I just think he should have at least tried.   And if Grandpa was not the best father and that's my alleged father's excuse - he should just buck up and start his own blog!

Email ThisBlogThis!Share to TwitterShare to FacebookShare to Pinterest
Labels: alleged father, father, Father's Day, relationship, This is why I am Single