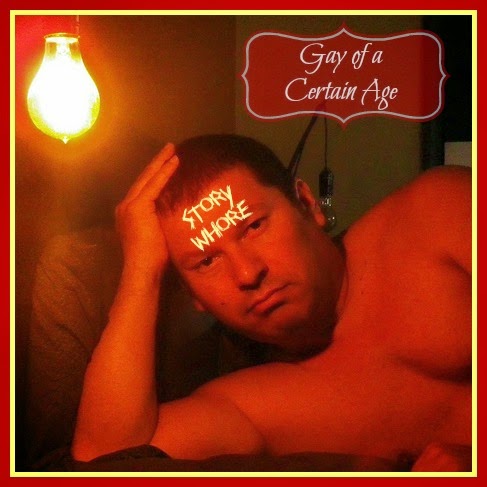 As a gay of a certain age, I've certainly had my share of adventurous sexcapades.
I didn't come out to myself & others until I was 28 years old, and soon after I was making up
for lost time.  Every weekend seemed like prom night, and since I was young(ish) & vanilla was my flavor of choice, finding someone to bounce jangly parts with wasn't very difficult.  In the past ten years, or so, my adventures have slowed down drastically and seem as likely as The Wizard of Oz being shown on Network T.V.  I nailed a cardboard sign that says "Special" that I twirl whenever I manage to have someone in the bedroom.  The drop in my adventures can be attributed to a few things including, self body image, lack of interest in the pursuit, really good T.V. shows, a great relationship with my hands... But, I would say the biggest reason is that I've stopped being a Story Whore.

I used to be a prolific Story Whore.  That is, if I was not having a good sexual experience I would stay in it so that I'd have a story for the brunch table the next day.  So, if my sex life wasn't great, brunch with friends would be, because who doesn't love a story about sex gone terribly wrong over a protein scramble with avocado?  I used to enjoy reliving the awkward experience, like the time a guy I confessed to that I liked toys (i.e. collectible vinyl figures) invited me to his place where he had toys to show me.  His were building blocks with baby Muppets on them.  He also had rubber sheets.  Also, our sex consisted of him blowing me for 90 minutes, to where I was less erect and more puffy & swollen, followed by a request for me to leave my mark on him.  Apparently, peeing on him is where I reached my cut-off.

I'd never set out to have a crazy or lousy sex experience, but when it started going south in the south, instead of leaving I'd buck up because, I think I had convinced myself that it was my duty.  It started happening before Carrie and her friends sat around sharing their sex stories on HBO, but I will say my high tide of Story Whoring was during the run of SEX AND THE CITY.  Whether we meant to be or not, we gay folk were the model the NY foursome who found themselves in many different sexuations.  I suppose that the fun spirit of the show made it more appealing for me.  Why wouldn't I stick around and see how the drunk groom to be, who somehow stumbled into a gay bar in South Beach and wanted me to plow him the weekend of his wedding, would end up? (The ending includes the quote, "Stacy's gonna kill me," at 7:00 am, as he awoke.)  It had to be better than returning to my hotel room alone, right?

I'm not sure when it happened, but I do remember being in the throws of shallow passion and the guy I was with started doing this weird thing that was very much like a blow fish and I consciously told myself, "Leave. Fight the curiosity and leave.  No more."  And with that, I lightly moved his pucker off of me and made a polite excuse and left.  I did not promise to call him later.  I just said, "thank you." and left.  Now, my few sexual encounters are not as easy to come by because of age, and less time spent looking for it in obvious places, but mostly because I'm not as likely to accept just anything.  I no longer think that bad sex is better than no sex.  Bad sex for me is not a matter of judging someone for an odd bit that they are into, or a weird move they are trying out, it's simply a matter of how well we are connecting.  If we're not connecting, being present with each other or I feel like I'm just a handy hole, it's bad sex.  Having someone want to spread orange marmalade on me while wearing a metalic jock and a Mexican wrestling mask is not necessarily a deal breaker, if we're both into it and connecting.

So, I'm still up for an exciting one night stand or friendly sex encounters while I'm single, I'm just not going to go through the motions waiting for the amusing hook, especially because there isn't always one.  I have no problem cutting it short and heading home, or showing them the door.  Now at brunch, my stories of personal empowerment don't get the same reception as my regular bad sex stories did, but my gluten-free french toast tastes a little better.
Posted by Danny in WeHo at 2:42 PM