This Is Why I Am Single - My Alleged Father 1 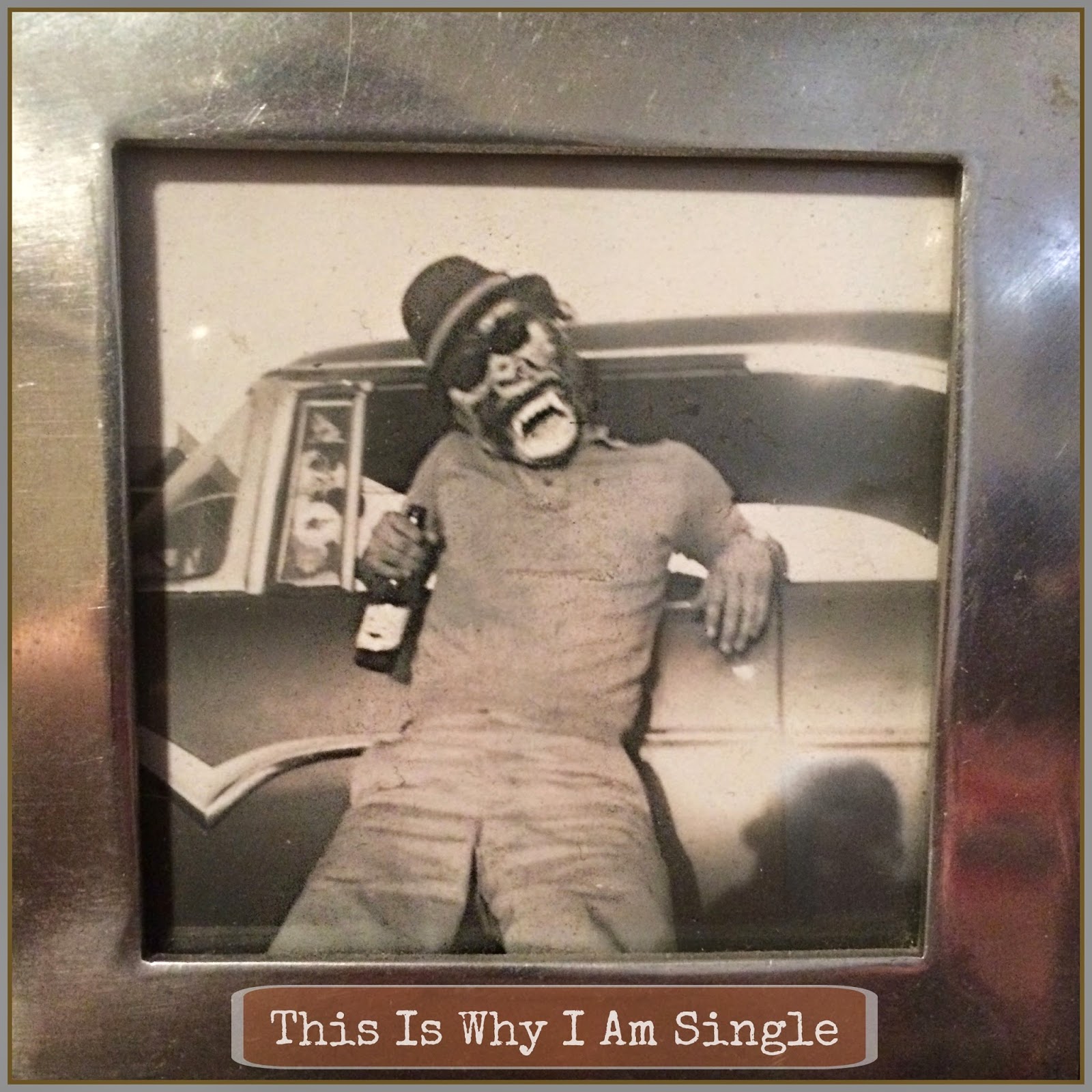 This is my favorite photo of the man I call My Alleged Father.
I call him that, playfully, because he wasn't around much
when I was growing up and when he was around,
he was usually a drain for my mother.  My mother, and relatives on his side
of the family would tell me that I looked a lot like him as I was growing up.
Some said that we were very much alike.
Being that he wasn't around much, I never saw the similarities.  I do now.

I like this photo because it's one of the few similarities I don't mind.
It shows his sense of humor and hamminess.
I started realizing our similarities when I stumbled upon one of my mother's
high school year books and discovered that my father was a member of the Drama Club,
just like I was.  Then, I realized my love for movies came from him.  I remember he used to
take us to the movies ALL THE TIME!  Sometimes it was even a triple feature.
(I used to think he was cool for that, until I realized a little while back, that he did it
because he didn't know how, or want, to interact with his children.)
One time, I stunned myself when I started plucking stubble from my face
with my fingers.  Gross. Why was I doing that?  It became an uncontrollable habit.
Then, I remember seeing my father do it all the time.  Do we really inherit our parents habits?
If I inherited that dandy gross habit, then I must have gotten my dreamer tendencies from him, too.
My alleged father always has a dream ready to go.
Most of them manifested as money making schemes, that never lasted very long...
That is, once the money didn't immediately materialize he was out.
That made it very difficult to support a wife and kids, but it didn't stop him.
Where I think a more responsible person would just give up the schemes and get a steady job
and, at least, help raise four kids, he would just move on to the next project.
That's where I started to notice how selfish he was.

He wanted to have money.  I'm not sure if he wanted to make money, I'm sure he wanted to have it.
He is a classic "Have your cake and wear it, too" type of man.  The time he did have a steady job, (That I was old enough to remember) he was a manager at a famous boot company.
During that period, my parents' bedroom walls were lined with pairs of every exotic boot there was.
He had boots made out of snakes, alligators, ostriches, sharks and many more of the ilk.  I'm sure there was one pair fashioned out of real genuine Mogwai!  Even though he had a job and all these fabulous boots, it was still up to my mother to feed and clothe us.  Of course, he felt welcome to that partial full refrigerator, too.  The boots were only a small example of this selfishness, there are others.

You see, my alleged father is also the classic, "Have your Jane and eat her, too" type of man.
As a child in Kindergarten, I knew that my alleged father had a mistress, or Side Cooze as I call her.
I knew exactly what a mistress was, while other kids were still learning that a kitten is a baby cat.  The Side Cooze, Minerva, was not exactly a beauty and she had a voice like Minnie Mouse swallowing glass, so even as a child, I could hardly imagine why my alleged father would favor her over my darling mother.  But there it was, I'm not sure I understood the dynamic, but I understood that there was another woman in my alleged father's life, who wasn't my mother and it hurt her.
I don't remember my mother being particularly dramatic over the situation, or even embarrassed,
but I do remember it hurt her.
What a selfish man.  I don't know how it came about, but there he was, a man with a wife, a mistress and four children ( with my mother, anyway), but it still didn't seem like enough.
Growing up with it has made me worried and This Is Why I am Single.
It's not because I worry that I will end up with a man like my alleged father,
who would cheat on me and flaunt it in my face and drain me like a leech in snakeskin boots,
it's because I worry that I could be like him.
If we have so many similarities, what if that is one of them?
What if I can be that selfish?
Posted by Danny in WeHo at 8:03 AM

Email ThisBlogThis!Share to TwitterShare to FacebookShare to Pinterest
Labels: alleged father, father, relationship, side cooze, This is why I am Single