This Is Why I Am Single - Me vs Me 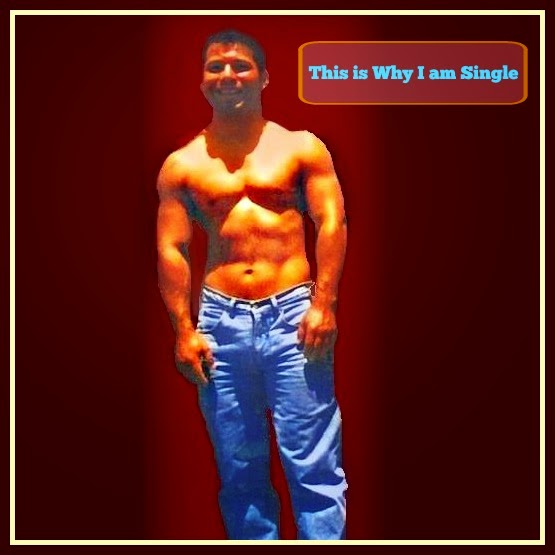 Here's a nice photo of me at some street event, probably in 1999.
Dang, I had abs.
This is back when I had a job as a temp and had a friend who was a writing and a work-out partner.
I would work until 6:00, then head to his place where we would write until 8 or 8:30, then head to the gym, then get get a lite dinner.  I usually got home and in bed by 11:00 and started all over again.  Looking back, I think that steady schedule really helped me keep things in perspective and goals in sight.  Maybe a year or so later, our differences became more apparent so we stopped writing together and eventually stopped working out together.  That, coupled with me getting hired full-time, making me able to afford lunches and dinners that I couldn't have as a temp, led me down the road to Chunky Town.
I was still working out, but other things got in the way, like acting, networking, socializing , T.V. watching and shoe cleaning.  When I look at photos from that period, with my 2015 vision, I still looked pretty good, even if then, I thought I was fat.
Currently, I'm not  a gym goer (I still pay my monthly dues, which I call my Fat Tax), and I'm actually fat.  Not the exaggerated Hollywood - HaHa Funny Fat Guy fat, but the Dr. BlueEyes saying, "You need to lose 40 pounds," fat.  If you looked at me walking down the street, you might think you're seeing an anthropomorphic avocado strolling along, but you probably wouldn't think, "Wow, that guy is fat!". Granted, the fact that not doing crunches in a long while has me walking with my stomach out, as if it were Toucan Sam's snout sniffing for Fruit loops, which enhances the belly image, but if I suck it in, it ain't so bad.  Therein lies the danger. I can rationalize that it's not great, but it's not that bad.  But it is.
So here I am, late forties and looking at a pic of myself in good shape wondering what went wrong.
I find myself very easily thinking, "No wonder nobody wants to date me! I'm a chunky schlub."

Now, I have the pic on a vision board I see every day to tell myself I can get back to that.
And that is going to help me get back to that!
Isn't it?
Or am I sabotaging myself by competing with a me that is 15 years younger and in a situation that really lent itself to staying thin?  Seriously, would I have chosen to eat a can of kidney beans or tuna for lunch if I could have afforded more?  I'm not saying that I can't get in better shape, or that I can't buckle down and set up a strict schedule that has me going to work, then to the gym, then to bed.  I'm not saying I can't make better food choices.  I'm just wondering if I'm giving up before I start because I'm trying to literally be 15 years younger!  My heart & spirit say, "You can do it!', but my head says, "Dude, don't even!" and the head has my lowered metabolism, aching back, growling stomach and X-Box cheering it on very loudly.
Somewhere in between the spirit and the head, I need to find what it is that'll get me back into being interested in being fit again, along with realistically living the life I enjoying living.  I realize I'm not the schlub I get to thinking I am, and I know I'm attractive to some guys, but I do desire some more confidence in that area.  So, when I do get back into the fitness fray, I will be competing with my current self and not the self that I can no longer, realistically be.
Who knows, maybe when I'm in better shape and finally have the confidence to approach that guy I couldn't have before, it'll turn out he was really attracted to the schlubby me.
At least I'll be healthier...

Email ThisBlogThis!Share to TwitterShare to FacebookShare to Pinterest
Labels: fat, fitness, Shirtless, This is why I am Single