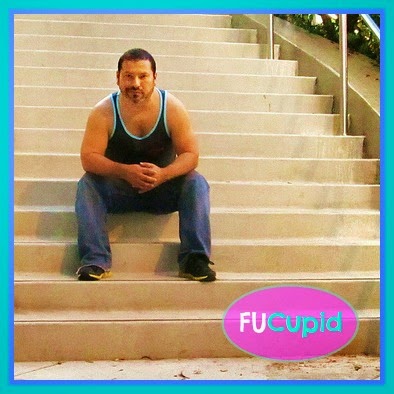 I'm not one to invest much time in the on-line dating sites,
and I'm even less likely to spend any time on the sex getting sites.
Don't get me wrong, I'm all for getting sex
and if I could just pick up the phone and order in exactly what I want (legally...and for free)
I certainly would.
Simply put, I find that these just for sex sites are insufferable, if not just downright damaging.
Now, it may come as a surprise to you, but I am not an Italian swimsuit model
who hasn't eaten in two weeks with 12 pack abs,  and it seems that that's what you need to be
in order for these sites to work optimally for you.  I'm not gonna get into "wah, wah, wah, poor schlubby me," because there's something I can do about my appearance,
I'm not even going the fantasy route and "Wah, wah, wah why don't guys super hotter
want to have sex with me?"  I'm just thinking, why can't I put my stuff up and shop around
without feeling like I'm walking an ISIS gauntlet.  Today, I'm specifically talking about MANHUNT.

I knew what that site was before I entered my email and started creating my profile.
The main reason I was signing up is I had a friend who seemed to be having great success,
he was encouraging me and there was a free three month trail period.

Despite said friend's advice, I put up my face pic as my profile photo.
SIDE BAR:  Said friend used his very nice & hot body pic for his profile,
got into messaging foreplay with another nice & hot body headless profile and when it
finally came to "your place or mine, let's trade face pics" it turned out to be
someone he knew and really disliked.  I like to avoid that.

My profile was honest and "what you see is what you get", with hopes of finding other realistic
average to schlubby guys.  If God created me for any reason, that reason is for me to tell you
THERE AIN'T ANY.
In any case, seeing as how I had only 3 months to determine whether this is a service I'd continue to utilize and pay for, I set off on my International Male catalog shopping adventure.
As some of you guessed, I spent hours scouring profiles, sending initial messages,
avoiding messages I didn't want and other frustrating activities for that one "Maybe" that
always disappeared by the end of the night.  So I stopped after a week.

Then, I was in Las Vegas for a weekend, still within that 3 month trial, so why not?
If I thought that it was disappointing to swim through the "no fats, no fems" at the end of
the LA profiles, I was in no way prepared for the wade through
the landmines of HOSTILE Las Vegas!
Most of the profiles consisted entirely of what they didn't want.  At least 90% started with,"no one over 30 years old!"  95% started with the phrase "If you are..."
I didn't even get passed the first page and already I was ready to jump out the 12th floor window.
Maybe the strategy there is that if everyone knocks you down to an insecure puddle of
goo on a multicolored, polka dot-diamond-paisley patterned carpet, then you'll just be grateful
for whatever you get if you're brave enough to approach someone.
I bravely stuck it out and I did get a response.  I had a guest in my room that night, who didn't
look quite like his profile pic, who was well over 30 and just odd enough to make this
former Story Whore, share something at brunch not long after.

During the three month free period, I had 4 hook ups, only one of which looked like his picture,
was a genuinely nice person and a fun romp.  As much as I enjoyed him,
I don't think it was worth the hours of torturous assaults from anonymous men letting me
know how much they didn't want me, without even having spoken a word to me.
I don't think that the three month was free, there certainly was a price that my self-esteem paid.
Lucky for me, my self-esteem has a strong survival instinct and it pulled me away from
my computer and into the streets, where the super hot guys are less likely to be so hostile to my face.

DISCLAIMER:  I've met and know some very nice super hot guys.  They are real.
...and they have faces!
Posted by Danny in WeHo at 10:44 AM