This Is Why I Am Single - My Alleged Father 2 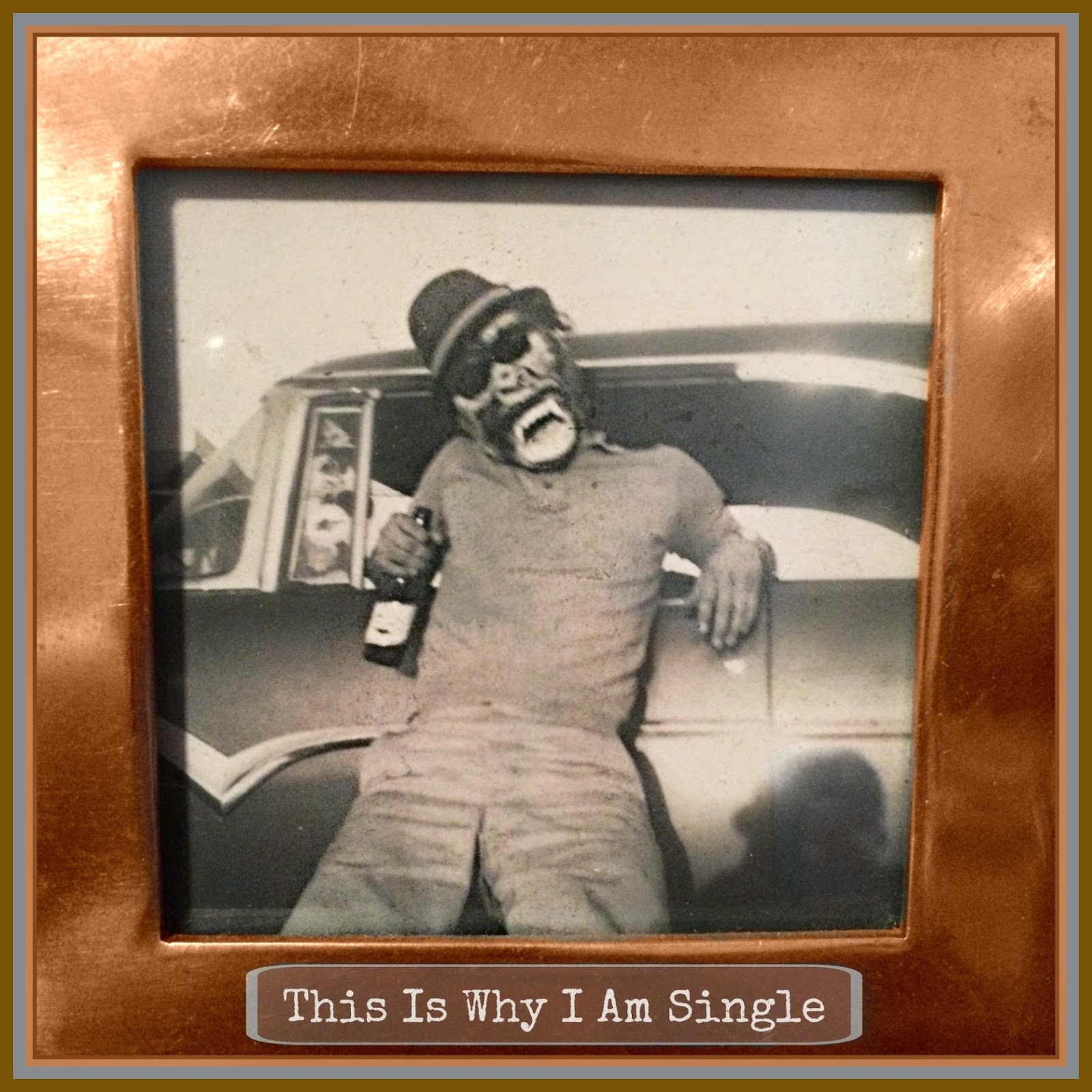 My alleged father, whether he meant to or not,
instilled in me a great appreciation for movies.
I can remember days, pre-school, or in summer that we spent in movie theaters
and nights in the backseat with pillows & blankets,
sneaking peeks at other movies around us at the Cinema Park Drive-In.

One of the nights I'll always remember is the night in 1973 when my alleged father
told me we were going to the movies.  As we left the house, it was just me and him,
so I assumed it was a rare father/son outing.
I'd say I was excited about having rare bonding time with my alleged father,
but I was a kid and I was really excited about the movies- a double feature!
That was until we made a stop before arriving at the Capri Theater down town and
picked up Minerva- The Side Cooze. 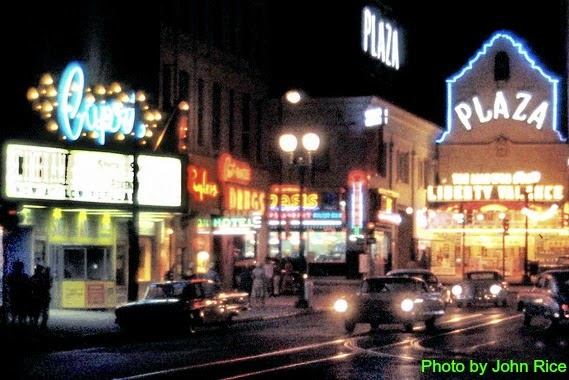 The Capri was one of a few movie theaters in down town El Paso, Texas,
where we would spend countless hours watching movies with my alleged father.
I think I remember seeing Tidal Wave, Beyond the Door, The Legend of Hell House,
Phantom of the Paradise and many other age inappropriate movies there.
And they we always double features.

This particular evening, the fine pairing started with the classic, Ride In a Pink Car. 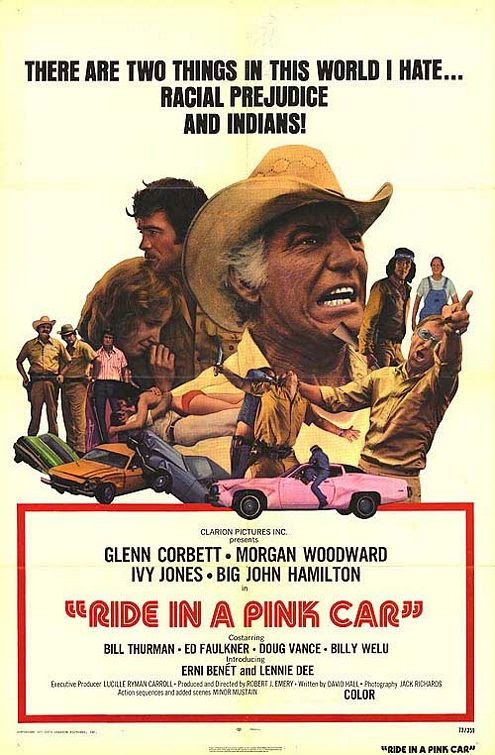 I was 5 or 6 years old, so I don't remember much about this movie except the title,
car chases, foul language and a lot of yelling.  I also don't remember if I was snacking,
but probably not, because my alleged father was cheap.
The follow up movie was the confusing Wonder Women. 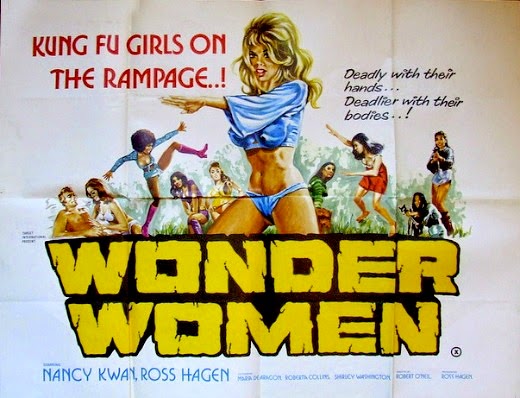 I say it was confusing because when my alleged father told me the title,
I was expecting Diana Prince and her super hero alter-ego.  There was none of that.
There were a bunch of women on an island, and there was a lab set, and mutants, then all hell breaks loose, some of them fall in the water and get shot in the boobies.  I think I remember that much because it was all so fantastical.
As I sit here and write this, I'm trying to remember what the seating arrangement was, it was a week night, so the place wouldn't be crowded... was I in my own row and they were behind me, were we all in the same row...
was I all alone for the length of two movies and not even aware of it?
Anyway, as an adult looking back, I'm sure there was some hanky-panky going on between my
alleged father and the side cooze during the show.  There had to have been.  Right?

Here is why I am Single...  When we got home, I remember I was dropped off and my alleged father
did not come in.  I was greeted by my oldest sister, at that moment an angry 11 or 12 year old, who grabbed my arm and pulled me to my mother's room.  There was my mother, in her bed with eyes
filled to the brim with tears.  My sister said, "You did that!"  I entered my mother's room and
went to her and quietly asked, "What's wrong, Mommy?"  She took a gulp, or two, of air and
said, "Nothing. Nothing, I'm just a little sad."  I still felt guilty.
Clearly, since my alleged father's side cooze was not much of a secret in our home,
my sister figured out who I had gone to the movies with, and if an 11 year old could put it
together, certainly my mother knew.  I had no idea, that when my alleged father said, "Get in the car, we're going to the movies." he was actually saying, "Come with me, we're gonna break your mother's heart."
Looking back on it, I think he thought he was being clever
saying he was taking his little boy to the movies and the sneaking the side cooze with us.
Was he unaware that we all knew who she was?  How could that be possible?
Who did he think we thought she was?  Incestuous Auntie Minnie?
How could anyone use their child like that?
How could anyone stay married to a man like that?
Could I do that?  Could I use my child? Could I stay with a man who would use his child?
In my case, my child would probably be a chihuahua I've yet to adopt, but the questions still stand.

Despite my mother swallowing her pain and saying nothing that would make me think I did anything to hurt her, I can't help but feel a little twinge of guilt.  I know that I, as a 6 year old, did nothing wrong.  Maybe it's still in my head because my sister said, "You did this."  I don't blame her. She was just a kid, herself and I did appear to be a disloyal little monkey. There's an icky feeling it always give me to think about it and if there's anything I can do to prevent an innocent
chihuahua from feeling like this, I'll just stay single.

Email ThisBlogThis!Share to TwitterShare to FacebookShare to Pinterest
Labels: alleged father, father, movies, relationship, Ride In a Pink Car, side cooze, This is why I am Single, Wonder Women. The Capri