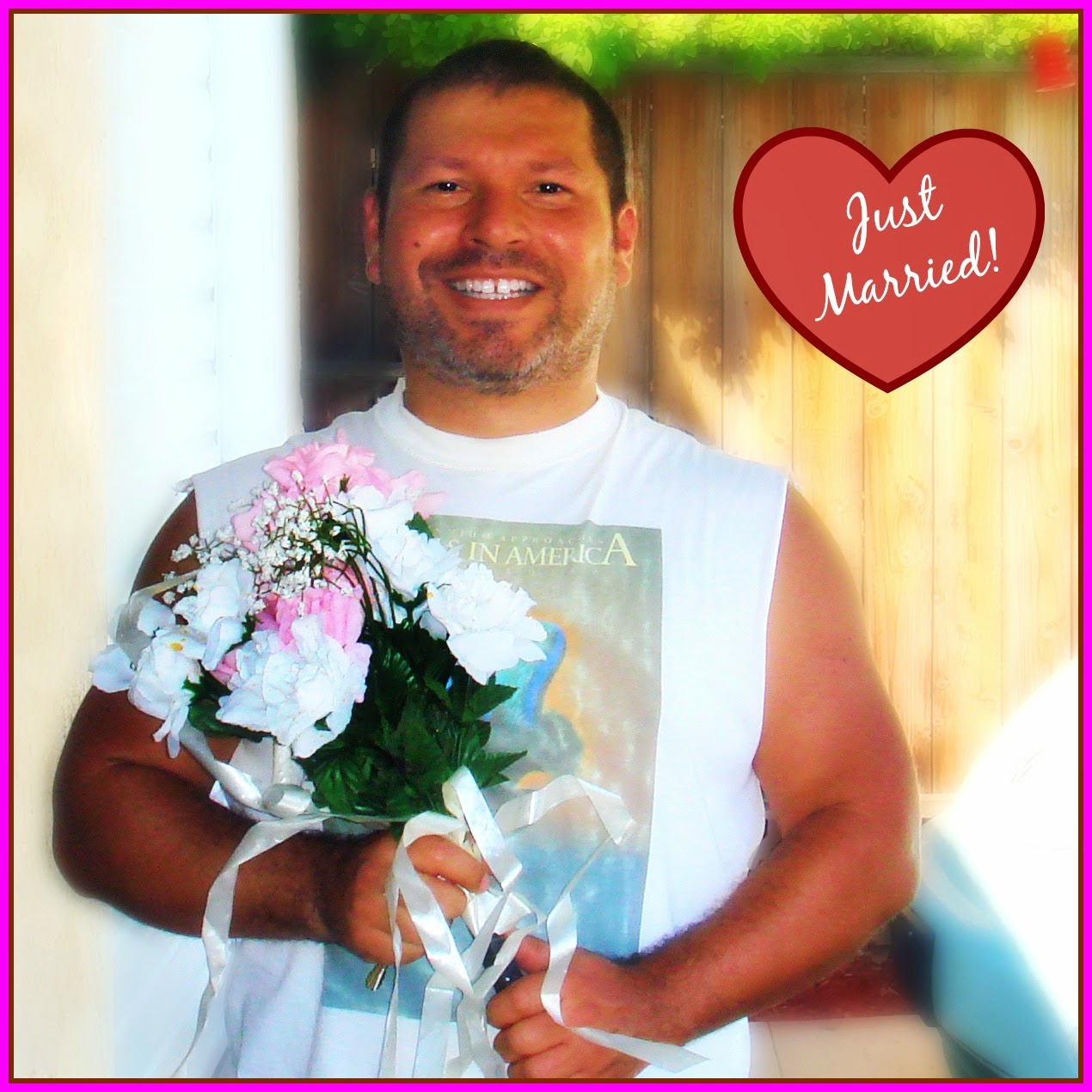 Holy crap!!
Who would have thought it?
But isn't that how it always goes?
I start this blog about dying alone and less than a month later, I'M MARRIED!

I had a "This is why I'm Single" entry about the one we let get away and why we are stupid to let it happen, but before I could post it, the one who got away came back!
I guess it's true, if you love something screw it up and if it really loves you, it'll ruin your blog!

I can't really say much about it here, because you'll be hearing more about it in the press.
Yes, I have been re-swept off my feet by a person who is terribly kind & forgiving, but also a "name".   I can't drop this name before Mary Hart & John Tesh do, but he's told me I can hint...
So, to avoid a scandal... I'll just say he's a Latino on a top rated drama on network T.V.

We met when he came to see Chico's Angels 7 years ago.  He hung out with us after the show and to my unexpected delight, he took my playful flirting seriously and snuck me his number without the two other Angels even knowing.  We got along pretty well and best of all, I really felt like he "got me".  I don't think he always understood my hyper mind/mouth combo, but he always asked before jumping to a conclusion.  He was patient with me and I found it very easy to be patient with him.  The sex was magical in that it was rather vanilla, but each time we were together it was like the first time- we never assumed what was going to happen and followed the moment as it happened; our only steadfast role was pleasure giver.
Then, I screwed it up.  He had just started on a Showtime show and we would go out with Biz people occasionally and hang out with famous types.  Even though he told me it wasn't true, I always felt unstylish and schlubby and so out of place.  I would let myself feel abandoned (and maybe jealous) when he was at work, acting professionally, like I should have been.  I felt inadequate on so many levels!  Maybe I just wasn't ready for a relationship like that- I certainly wasn't ready to be working on a TV show like he was.  I made it really easy for him to break up with me.

Cut to two weeks ago when I was very grateful that pad thai is gluten free.  We bumped into each other at Sweet Chili where I was having a noodly lunch and he came in for take out.   It was me he ended up taking out.  Everything felt like it did a while back, with a all the tingling and warm stomach pit and giddiness, but with a thunder jacket over it.  It felt mature.   I told him about this blog and he laughed heartily and asked if he could die alone with me, then got really quiet and awkward.  So we spent a little time together and I dared not even toy with the idea of getting back together.  On Monday night,  I was getting home from rehearsal and he was parked outside of my apartment building.  When I approached the car, he got out, opened the back door and started digging in the backseat.  He said he had something for me.  First he tossed out a Doritos bag, and said , "not that", then came a  Showtime baseball cap, "Not that," then came a bundled bouquet of flowers.  When I caught it he said, "Ha!  You caught the bouquet, now you have to get married!"    And that was it.
We got married yesterday afternoon at Beverly Hills City Hall (sorry West Hollywood).

I can't post any pictures, yet, but here's one of me, reenacting the bouquet catch for my camera's self timer.   We're gonna honeymoon after the wrap party, then, I'll figure out what to do with this blog!!!!